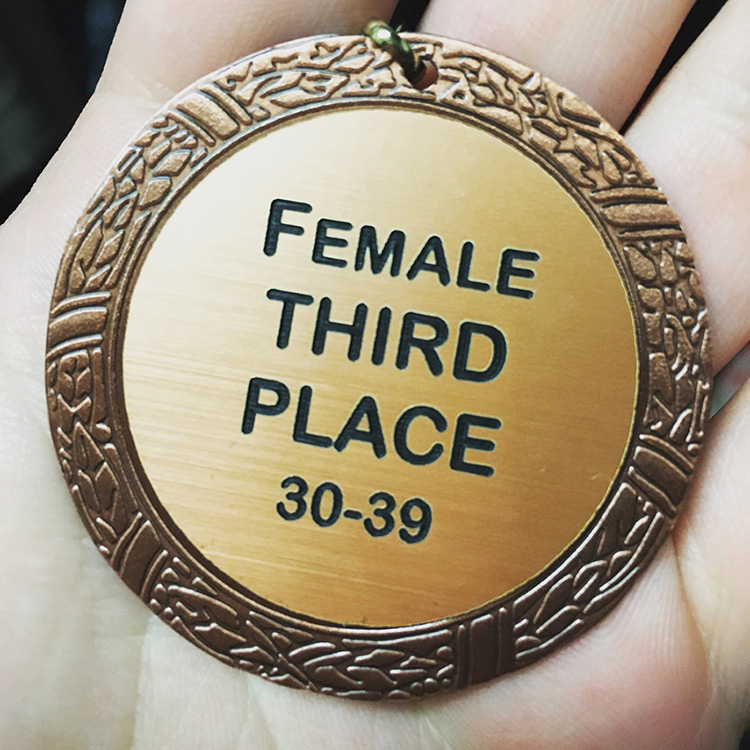 April 22nd was Endurance Day at Orangetheory. I was supposed to take off that day, but I decided at the last minute to sign up – I always love a good endurance run. Well, I beat my time AND distance from the day before, beating my 2 mile time by just over a minute (23:09), and averaging about an 11:20-ish min/mi pace for the entire run, which, at that point in time, was officially my FASTEST. Ever. About halfway in, I started calculating my time and I knew. I knew I was going to do it.

I started running for the first time in my (unathletic, sedentary) life when I was 30, on 5/27/13… Almost a year to the day before I took my first OTF class, coincidentally. I can’t believe the progress I’ve made since then, and especially, over the past year.

Sometimes things are just meant to happen… a certain place, a certain time… the way you least expect it, you know? I never run two days in a row and I should have taken that particular day off. But I surprised myself. I don’t always feel like a runner… but that day, I did.

A couple days later, I surprised myself again. I ended up running two 30-second all outs at 9.5mph, officially the highest speed I’ve ever run at before! Gears started turning in my head…

That week, I decided that it was time to sign up for my first 5k of the year. I had run the Fiesta 5K the previous year, and my results were… not great, let’s say that. Haha. I was not in the best running shape, we had just moved to Georgia, and I was not used to the hillier terrain up here. Thankfully, they moved the 5K to the Big Creek Greenway at Fowler Park for 2016 compared to the extremely hilly course it was on last year. The Greenway is much flatter! It seemed to be fate that I was signing up for that race, since my Orangetheory Fitness studio was registering to sponsor it as they did last year, and they asked me to run it to advertise them, just as I did last year. Yay for a free race entry!

Considering the times I’d been running at OTF, I set a goal for finishing this 5K somewhere in the 35-36 minute range, which would shave a couple minutes off my last 5K time from December.

Again, I totally surprised myself…

My GPS did not register 3.1 miles on the trail but the time IS correct. My official chip time was 34:06! That means I shaved FIVE MINUTES and 20 seconds off of my last 5K in December! The feeling I had after finishing this race was simply unbelievable! I knew that if I tried a little harder, I could maybe… just maybe, get a few seconds faster…

Two weeks later, I decided to do another race, the Saddle Buddies 5K! It ended up being a great weekend to run, the temperature that morning was a cool 65 degrees. I was actually quite cold waiting for the race to start, but I knew I would warm up quickly. It was a beautiful course going through rural North Forsyth County, bright and sunny and cool and perfect.

I felt great going into it and kept going strong the whole way. I was amazed to find that I beat my PR from 2 weeks ago, with a time of 33:36, and I placed 3rd in my age group!

Just looking back at my race times from the past few years, it’s incredible to think that I ran my first 5k in 48 minutes in September 2013 in FL, and that on May 16th I ran the same distance (and not even in flat Florida!!) in just over 33 minutes.

I feel like I’ve learned a lot about running in the past few months. There was a time I thought I would never get under 40 minutes. I did that in December. I never imagined getting under 35 minutes. I did that in April. And then in May… I was even faster. I don’t know if I will ever get under 30 minutes, and it’s okay if I don’t… but I’m light years better than I ever thought I would be, and that’s enough for me.