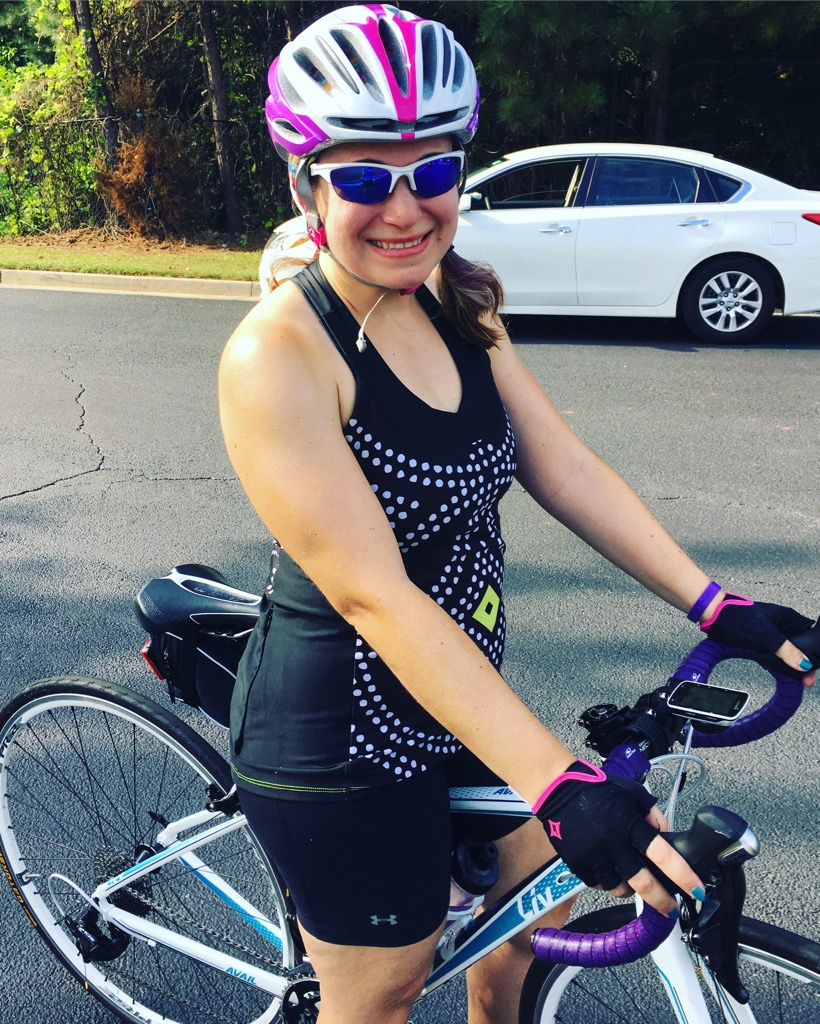 This post should have been published in September, but it took me a while to finish it. I am trying to catch up again with my blog… so here we go.

I was signed up to run the Terrestrial 5K on August 13th, a race I ran last year and absolutely loved, and I found out that my friend Shelle was going to be running the half marathon at the same event. She said her ankle had been bothering her, so she’d planned on finishing the half, but was going to be doing quite a bit of walking. I said, that’s fine. I’ll just hang out and wait for you after I finish.

I marinated on this for a couple of weeks, pretty much leaning towards, NO WAY.

Then she asked again the week before the race. I had just recently finished a 50-mile ride on my bike, so I said to myself, if I can ride my bike for 50 miles, I can SURELY jog/walk 13.1… right? RIGHT!

I emailed them the next day to change my registration to the half marathon.

HOLY CRAP, what had I just gotten myself into?! Not only had I not even bothered to run at the gym in 3 months (spin bike for the win!), but I also had never run more than 4 miles… Um… ever?

Yeah, I was going to do a half marathon.

Yeah, I can totally do this!

The day of the half, I went to my usual Yin Yoga class in the morning (the race was at night), and got the most wonderful deep stretch. My amazing instructor, Rose, led our class in poses that really helped align my hips, stretch out my quads and hamstrings, and made me feel like I’d just gone for a visit at the chiropractor. I honestly had never felt better in my lower back and legs. All of my yoga friends wished me good luck and I really began to get excited, knowing that I would be crossing an item off of my bucket list in just a couple of hours!

That evening, I headed over to Shelle’s house and we got ready to go.

I was very nervous before the race, but once we got started and got through the first mile, I felt better. Crossing the 4 mile mark was a big deal, as my longest race before that was four miles. Soon we made it to the halfway point. It was hot, and my back was just starting to get sore, but we were making good progress. As we went further into the course, we reached a huge hill that was tough to go up, but was amazing to run down! There were people on the sidelines from the surrounding neighborhoods sitting on chairs and blankets cheering us on! It was a great feeling!

By the time we got to the last two miles or so, my back and hamstrings were very sore. But we were almost done! We powered through and finally – finally – we reached the finish line!

After the race, I was sore, but didn’t feel too terrible. I had to go out and get my 13.1 magnet for my car. Slapping that thing on was an AMAZING feeling! I did it!!

I was scheduled to do the Metric Century route of the One Love Century bike ride (that’s a 62 mile bike ride, or 100km) just a couple weeks later, over Labor Day weekend. Naturally, I asked Shelle if she wanted to participate with me, and she signed up! I was excited as I had just done 50 miles at a good pace of 15mph a few weeks earlier, and I knew that even with the elevation in the 62 mile route, I was going to do just fine.

As we got closer to the ride, we discussed doing the full 100 miles. Well, why not? I’ve already done a half marathon and survived. I can do this too!!

I’d had some issues with my lower back before the half marathon, and it only got worse as we got closer to the bike ride. I was determined not to let these problems stop me, though. I had already come so far, and I was going to achieve this goal! I took it a little lighter at the gym and did a lot of yoga and felt confident that we would get there.

Soon, September 3rd arrived. It was Century Day! We found out that the 100mi route included over 5000 feet of elevation gain, right before we started! Holy cow! I knew there was elevation, but that…. was a lot…. and way more than I had trained for. We decided to make the decision when we reached the break away point if we would continue on – or just do the 62 miles instead.

Here’s me and Shelle right before the ride started:

There were lots of rest stops, and the scenery was simply beautiful!

Soon it was time to either continue on the 62 mile route or break off to finish the ride with 100 miles. There were not many people doing the full century, but I felt that we had come this far and it was Go Big or Go Home – we were going to do it! Right after turning on to the century route, we came across this beautiful peacock and took it as a sign that we made the right choice.

I am super proud of myself that I was able to complete both a half marathon and a 100 mile century bike ride… without REALLY training for either one. Just goes to show, we are often stronger than we think and our bodies can do a lot more than we can imagine. Also, I’m lucky I had a good friend by my side to motivate me through it!