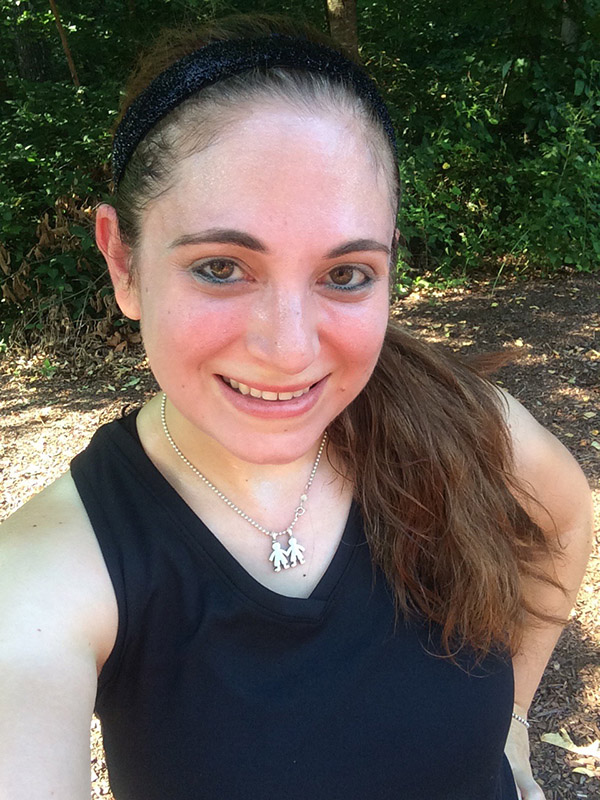 A little over a week ago, on July 18th, I did a 4 mile trail run at Sawnee Mountain Preserve here in Cumming! The race was presented by Dirty Spokes, the same group that did the previous race I did at Haw Creek Park. Sawnee Mountain is another awesome place to hike right here in our new town. I use the term “run” loosely, since it was a 2.1 mile hike up the mountain and then 1.9 miles back down! As I’ve mentioned before, being a Florida girl, these hills and mountains (!!) here in Georgia have really thrown me for a loop when signing up for races, but I’m enjoying the (somewhat painful- lol) challenge. This is only my second-ever trail run, so I am still learning my way around these compared to regular old 5k road races.

I had never done a race longer than 5k… actually I hadn’t even run or walked longer than 3.1 miles in a really long time, so I was excited to see how I did at this event. I knew that it was going to take me a while to make my way up the mountain since I heard that the trail was pretty rocky and full of branches… not to mention… the elevation… so I wasn’t aiming for any specific PR – I knew I wouldn’t hit it. I did decide that I wanted to finish the four miles within an hour and fifteen minutes, though.

Well, I was right. Despite stretching out beforehand, it was a hard climb up for me. My muscles were so tight, and I found the first mile to be really tough… after the first mile, I had settled into a groove and started enjoying myself. I took the second mile slowly, since it was quite rocky, but as I came up the eastern side of the mountain, the sunlight was coming down on me, and I really felt very much at peace. I had been in a bit of a strange mood that morning, and at that moment, being outside on the trail was just what I needed!

When I got through the second mile, I was definitely feeling it and was so relieved when the course began turning downhill. I really enjoyed jogging down and had fun dodging the rocks and branches. I could hear my Runkeeper app in my earbuds telling me the elapsed time, and I knew that if I was just a little faster, I would meet my goal of finishing before an hour and fifteen minutes. I forced myself to speed up, and I did it – my official time was 1:12:29! I was so, so proud of myself! I have to say, without doing the incline training at Orangetheory the past few weeks, I don’t know if I would have made it!

Of course, after I finished the 4 miles, I thought to myself, “hey, that was tough, but it wasn’t so bad… I could totally go another 2 miles and do a 10k!”

So… I wonder what will be next up on my plate! 😉