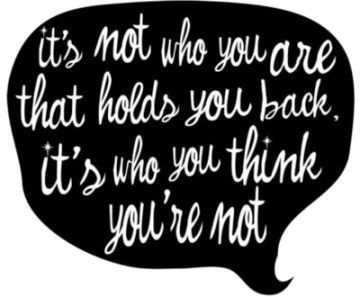 “It’s not who you are that holds you back – it’s who you think you’re not.”

During my yoga class yesterday morning — which honestly was a lovely class — there were, of course, several postures that I had to modify – several that I flat-out could not do – and some that I did, even though they hurt, because I just wanted to be able to do them.

I’m sick of the voices in my head that constantly berate me for what I can’t do. “Accept – Accept – Accept” is a repeating track over and over in my mind, yet the more I tell myself to do it, the more I try to prove I can – the more I find that I am struggling HARD with being unable to accept the fact that my body (which I’ve worked so hard the last few years to get into shape) is turning on me. The word is giving me a headache from shouting it to myself so much.

And the voices in my head were loud this morning:

“You’ll never be able to do that.”

“You don’t deserve to be in this room.”

There was more, but that’s the highlight reel. How often do we talk to ourselves in this manner, and why is it acceptable? I would never, ever say something like this to a friend. Instead, I would say that I made the right choices to serve what my body needs, I still showed up for practice, and that sometimes it takes more strength to hold back and do the right thing than it does to push through.

So, why can’t I believe that?

My body is what it is, failing on me or not, and I need to move past that if I’m going to move forward.

However, it is, admittedly, a disappointing, even a lonely feeling, to modify as much as I do in an intermediate class. When I practice alone, I obviously do what I love and what makes me feel good, and it’s not always a huge challenge as I avoid anything that causes even a twinge in my lower back. In a class, it feels like I’m shining a huge Bat-Signal type spotlight on everything that I need to change to accommodate for my issues. Like I’m the odd one out. Even though I’m pretty sure I’m the only one who is thinking of myself that way…

I’m fit enough.. I’m strong enough… I AM ENOUGH… but my bones and muscles and other inside bits often are not. Sometimes I have to deeply inhale, set my teeth, and move on to the next posture, letting as many of the feelings as possible float away on the exhale.

I have to believe that there’s a reason for the struggle. When it all comes down to it, we are all made from the same stuff as the stars – the same universal perfection – we are as perfect as we should be, no matter what is going on inside of our heads telling us otherwise. So, maybe all of this pain and frustration can one day be translated into knowledge and guidance. Maybe… just maybe, I’m meant to help others, who need MY yoga to be THEIR yoga, too… Only time will tell.

As difficult as it is sometimes, and as much as I sometimes want to give in, I am fighting back against the nasty lies that my inner voice says about me when I’m feeling weak. Carlos Castaneda said it best: “We either make ourselves miserable or we make ourselves strong. The amount of work is the same.”