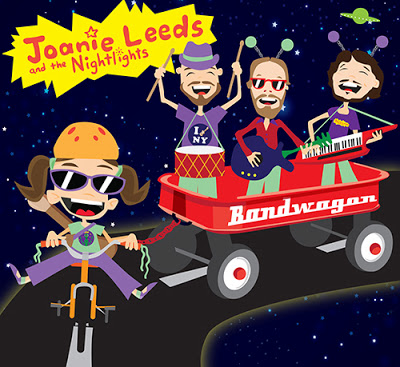 My kids LOVE music. One or both of them is always singing, all the time. There’s so much kids’ music out there – While I want my kids to enjoy listening to something fun and age appropriate, I also want them to listen to something I can enjoy, too! As we all know, there’s nothing words than listening to horrible-sounding kids music in the car! LOL.

Compromise, your name is Joanie Leeds! What kind of music does Joanie make? Well, she ROCKS! The self-proclaimed “Kindie-Rocker” along with her band, The Nightlights,  is about to release their latest album, which was amazingly completely funded by Kickstarter donations (so cool, right??).

There are SO many standout songs from this album, it’s just crazy how awesome it is! I knew from Joanie’s last album that she was fantastic, but this album has simply blown me away!

The album kicks off with the road-trip summer anthem, “Are We There Yet?” My son Zachary absolutely loves this song and asks to listen to it every single time we get in the car. “Bandwagon” is such a fun, easy-going, folk-style song to listen to and sing along with, easily our favorite. We love hearing “I Love New York” and “UFO” and the beautiful, pensive “Family Tree,” which inspires thoughts of those we love. “Nutritious” is a fun play on an old hit song that is sure to give moms, dads, and grandparents a good chuckle! At the end of the album, you’ll hear “Bed,” which every kid (especially mine) can relate to with lyrics that plead, “I don’t wanna go to bed!”

Zachary (who is 4.5) says that he loves the album because it’s funny and he likes the music and to sing along to all of the songs. That’s a rave review from a preschooler, if I ever heard one! 😉

Overall, this is such a great record. Kudos to Joanie Leeds for making yet another fabulous album that can be enjoyed by adults and children alike. The album has been on constant rotation in my car for the past couple weeks – through the last week of school, our 16-hour family road trip up to Washington DC, and simply bouncing around town, we are constantly listening to “Bandwagon,” by Joanie Leeds!

You can pick up the album on Joanie’s website, Amazon, or other music retailers. You will absolutely not regret it!

Note: We received Bandwagon complimentary, for review purposes. No monetary compensation was received. All opinions are my own.

1 thought on “Get on the Joanie Leeds BANDWAGON – you won’t regret it!”