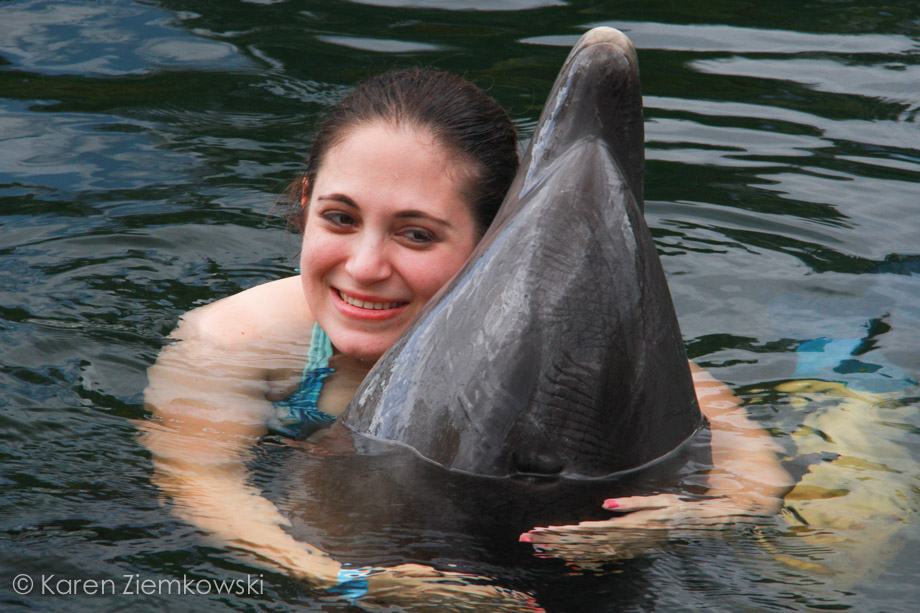 While I was recapping my year in a previous post, I realized I had missed out on sharing some fun photos and writing a few posts. One such post was the time that my best friend, Amy, and I, took a girls trip to the Keys last August and swam with dolphins at Theater of the Sea in Islamorada!

At that point, I knew that our family was going to be moving to GA, but we weren’t quite sure when, and we wanted to get a fun girls’ weekend in before we moved out of Florida. Amy and I have been friends since 4th grade – so,  going on 24 years – and we have never done a trip – not even when we were in college. It was about time! We both love the Keys and both had been really wanting to swim with dolphins. It is a great bucket list item. We decided to book a trip for ourselves and stay at The Islander, which we really enjoyed.

As soon as we arrived at the Islander, we headed out to the beach area to look for food! Being in the Keys, I was ready for a fruity drink and some conch fritters!

That night, we went to one of my absolute favorite Islamorada restaurants, Morada Bay Beach Café, for dinner. Not only is the food fantastic, but the sunsets are absolutely divine.

In the morning, we were ready for our DOLPHIN SWIM! woohoo. We hit up another one of my favorite eating establishments, Bob’s Bunz, for breakfast. They make delicious breakfast plates and cinnamon buns. There are no food pictures because everything was so good, it was transferred to our mouths immediately upon arrival to the table. 😉

After breakfast, it was time to head over to Theater of the Sea. In addition to swimming with dolphins, TOTS is a full marine life park and showcases everything that’s wonderful about the Keys. We took the guided marine life tour upon arrival and scheduled out the rest of our day to do a parrot show, sea lion show, dolphin show, and bottomless boat ride and nature tour. Everything flowed very easily!

During the guided tour, we saw lots of different animals – I especially liked getting two “Crazy South Florida Lizard Spottings” in one day. Check out the size of the giant iguana compared to the cat. WOW!

Then it was time to swim! Amy and I had so much fun swimming with the dolphins. Grabbing their fins and having them pull you through the water is totally exhilarating. They are such sweet, smart animals and fun to play with. The following three photos were actually captured by the Theater of the Sea photography division.

We rounded out the rest of the day with the other activities at the park. First was the boat and nature tour, where a dolphin joined us for a few tricks!

Then we enjoyed the dolphin show!

Amy and I were both amazed by the Sea Lion show.

The birds were amazing too. It is incredible the way they can train them to do basic math and perform cute tricks!

Here we are at the end of our awesome day! It was such a fun trip, and one that we will always remember.

All photos were taken with my iPhone 5s (with the exception of the pictures of me swimming with the dolphins).