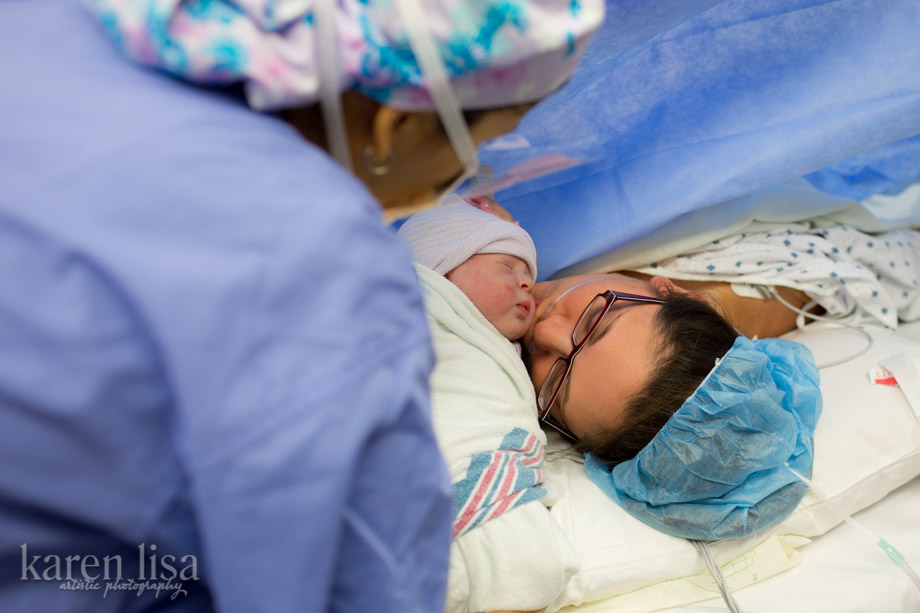 William turns 2 on Wednesday, and I realized that I never posted his birth story.

Thankfully, his birth was extremely uncomplicated. Adrian and I arrived to Coral Springs Medical Center at about 8am, as my c-section was scheduled for 10. I had some monitoring, and then my doctor came up and told me that it was go-time! I was very nervous, as Zachary’s birth was quite difficult, but my amazing doctor, Lona Sasser, assured me that everything would be okay. And it was. Because of the issues that occurred last time, she knew what to do to keep me from having the same problems. I had a great anesthesiologist as well.

At one point, during the beginning of the surgery, I felt like I was on Grey’s Anatomy. I had started to lose blood, and they gave me a shot to help with that. My heart rate also started to go up. I remember laying there just willing my body to calm down and do the right thing so that I could stay healthy and make it through the surgery without having to be put under, which is what happened with Zachary’s birth. Thankfully, within a few moments, I heard William’s first cries.

The moment of his birth was quite interesting for me. I’m not sure if it was the way he was positioned or how the anesthesiologist did the spinal for me, but I was able to feel the moment that William was pulled out of me. It was fascinating going from feeling “full” to “empty” all in a second. I did not have the opportunity to feel that the first time, and it is a sensation that I will always treasure and remember. Once they checked/weighed the baby and I got the chance to give him a kiss, they finished doing his eye drops and everything else they had to do while the doctor closed up my incision. Adrian took some great pictures of these first few moments.

When I was ready, they gave him to me and wheeled me into the recovery area where he got his first bath, got to meet his Mom-Mom and Papa, and I had the chance to give him a bottle while calling and texting more of my friends and family to tell them the happy news.

Later that afternoon, my parents picked Zachary up from camp and the two brothers got to meet for the first time, creating a special life long bond from the first day.

The c-section recovery was so much different the second time around. The second day in the hospital definitely sucked, but it was not nearly as bad as my first c-section! Once I was moving around, it started to hurt, and I was super itchy from the medication they gave me. Eventually, though, the itch went away, and on the day I was released, the pain got much better. By the time Will was two weeks old, the pain was majorly diminished.

Here are some special photos from William’s birth that I have never shared on my blog.