Skip to content
— Family, History of Me, Photography, South Florida — 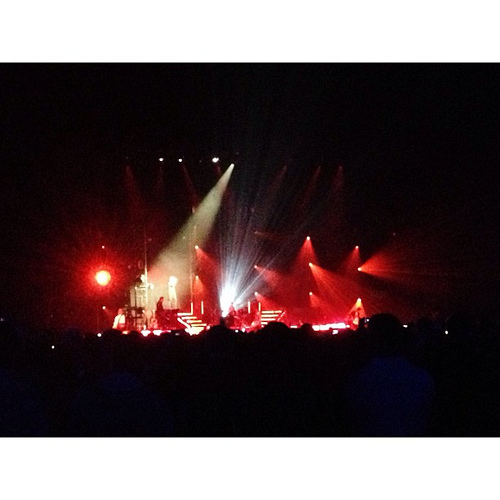 You guys. I have been so sick this past week! We all have, actually – me and the kids. Adrian was lucky enough to avoid the sickness. Those of you wondering how my Operation Rehydration challenge turned out, I’m giving it a few extra days since I’ve been sick and extra dehydrated. Anyway.

Yesterday was really the first day in a few days that I felt good, which I’m so thankful for, since I had tickets to see one of my favorite bands, Matchbox Twenty, with my best friend, Amy!

Here we are right outside Hard Rock Live at the Seminole Hard Rock Hotel & Casino in Hollywood: And here’s a shot from the concert. That glowing figure is the fabulous Rob Thomas, who was in top form last night! Amy and I have seen MB20 and Rob several times. For me, the count is only about six, but Amy has seen them 12 times! We’ve both been backstage and cherish those memories!

Back in college, when I wrote and did concert photography for the UCF Independent (yes, I attended the University of Central FL for two years before moving up to UF), I got press passes for a set of Matchbox shows and was able to photograph the band for my review. You can read that review, here on my blog: Matchbox Twenty Sets Florida on Fire. Hard to believe I wrote that article 12 years ago!!

I couldn’t help digging in the garage and finding some of my old concert photos from my MB20 concert weekend in April 2001. I was NOT a professional photographer back then (I was just a college freshman!), but thanks to my press passes, I was right there with the big guys, shooting with my little Olympus Zoom Point and Shoot camera! I spent a small fortune on film that weekend, but it was totally worth it, and an experience I will absolutely treasure forever.

Before I finish my post about last night, here are some pics of Rob from 12 years ago, since I don’t have any close ups from last night. Note, bucket list item: get press passes to another Matchbox show again, so I can photograph it with my big, bad, professional camera. Anyway — back to yesterday’s concert! I always enjoy seeing shows at Hard Rock. Stadium shows are ok, but I like a smaller venue and unless you’re seeing a band at a club (let’s face it, those days are probably over for me since all the bands I like now have pretty much made it big now, lol), the smallest venue we have here that is decent is going to be Hard Rock Live. The sound is always pretty good, it’s not far from my house, and we can usually get pretty good seats.

As for our seats last night, we were not on the floor, but might as well have been since we were in the first row of the risers in the back. I was pretty thrilled with where we were sitting!

Encore:
Put Your Hands Up
Back 2 Good
Don’t Change
Push

Some standout moments for me were the little 1996 interlude starting with 3AM and ending with If You’re Gone. Rob sounds just as good as he did back then! Also loved Kyle singing on Stay With Me and The Way, and I loved the new coffee house style arrangement they did with Unwell. As always, Long Day is one of my absolute favorites live, as was Push, and I simply adored hearing So Sad So Lonely and English Town. To me, those songs were just really good live.

It’s also so much fun just listening to Rob talk about the songs – one of the songs in particular, the whole venue was just buzzing listening to him speak, the song “Radio.” Rob talked about how back in the day he’d listen to the radio for hours and hours, finger hovering over the play and record button, just waiting for his favorite songs to come on the radio, then waiting for the annoying DJ to just shut up so he could start recording the song… and once his favorites were all recorded, he’d compile a mix tape of his favorites. It was something we all could totally relate to and brought us all right back to growing up in the 90’s.

Towards the end, Rob announced that they’d be touring this summer with the Goo Goo Dolls, another of my and Amy’s favorites from back in the day. Yay, another concert to look forward to!