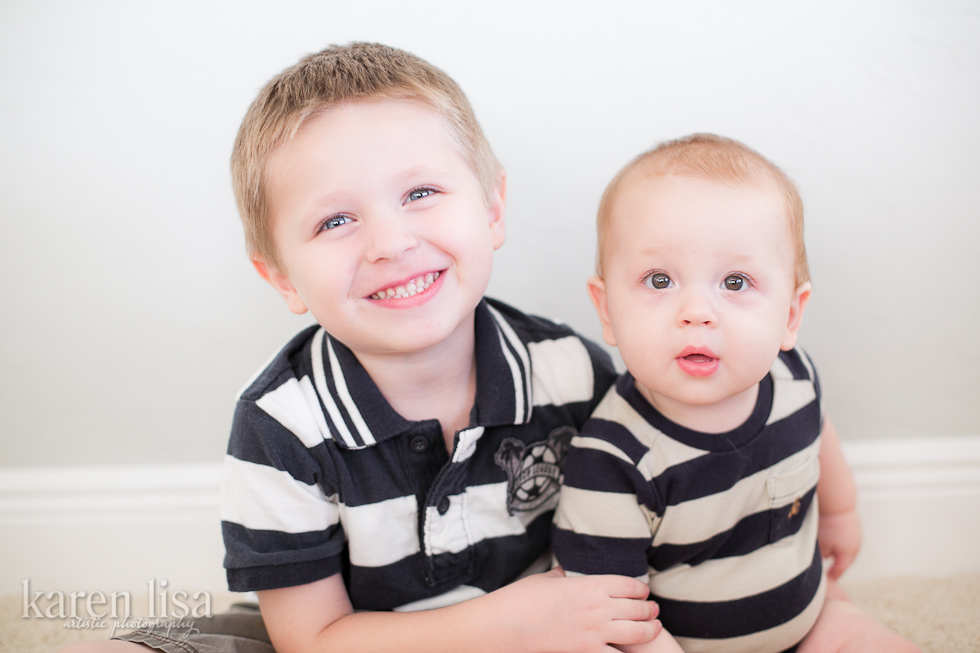 I love these little guys SO MUCH. Their relationship continues to blossom every day. Zachary tells me frequently that William is his best friend. Every night he says goodnight to his baby brother, and every morning, he gives Will a kiss and a hug hello. William just adores his big brother. He looks around the room, searching for him when he’s not there. His face lights up when he sees Zachary. I’m so glad that they truly are best friends and can’t wait to see the mischief they get into as they get older.

We’ve settled into a good schedule with the boys. Zachary is very respectful of the times when I need to tend to the baby, and the baby is so good – very patient. Baby William goes to bed every night around 6:30-7pm without complaint – and Zachary is usually in bed around 9pm. I love the time I get to spend with Zachary after William is in bed. Since he’s in school all day, I spend a lot of time talking to him while the baby is sleeping and enjoy being able to give him my full attention without having to take care of the baby.

The baby recently started sleeping straight through the night until morning. Sometimes my alarm even goes off before he is awake! Even if he does wake up before me, he LOVES playing with his toys in his crib! He watches his mobile and plays with the various stuffed animals and the musical dog that is attached to the side of the crib. He really adores toys and anything that makes music.

William recently had another big milestone — he cut his first two teeth! I took him to the pediatrician on January 9th for his six-month appointment and lo and behold, a tooth had come through just that morning. His second tooth came in two weeks later on January 25th! So exciting! Zachary wanted to know if that meant that William could eat waffles, just like him!

William is getting so close to crawling these days! He is a good sitter and sits very nicely for pictures. 🙂 He likes to sit in his play pen and play with his toys… and he still loves the jumperoo as well as the exersaucer… but he is sooo anxious to get moving! Zachary is super excited about the prospect of the baby learning to crawl and asks me at least once a day if he is crawling yet. I have no doubt that it will happen any day now. Right now he is such a portable little guy and is so good when I take him places. He chills in the stroller playing with a toy, or sits sweetly on my lap. I’m sure that will change, so I have been enjoying taking him out as much as I can. He has impressed quite a few of my friends with his good behavior. 🙂

As for Zachary, he makes me smile all the time! He is such a funny kid, and he is getting smarter every day! He still loves dragons and dinosaurs, he loves to go to the park (which I’m trying to do more often with the kids), and he loves to do pretty much anything with me, Adrian, or my parents. If we are going anywhere, he wants to go – no matter if it’s Starbucks, Home Depot, or to the drug store. He is very curious about everything and likes to know how things work, what words mean, and asks a lot of questions. He absolutely adores his family. He is sensitive and emotional and gets upset if he forgets to give me a kiss or a hug goodbye in the morning when he leaves for school. He says the most hilarious things all the time, and he is very creative. I love watching him play, and I love watching him entertain his baby brother.

I can’t believe I have a four year old and a seven month old! Time is flying much faster than I would prefer. I hug my boys a lot and think about the fact that they won’t be so little one day. I’m trying to remember as much as I possibly can of this special time.