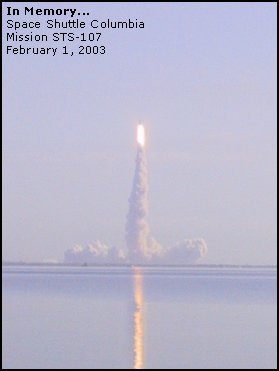 I wrote this on Facebook on January 28th – the 30th anniversary since the Challenger disaster and NASA’s official Day of Remembrance for the three tragedies that occurred at the end of January and beginning of February. However, today, February 1st, is the 13th anniversary of the loss of the shuttle Columbia and I wanted to make sure this was posted to my blog, too. Please take a moment to read it.

Everyone is sharing pictures of the Challenger explosion today. It’s hard to believe that 30 years have passed since this horrible tragedy in our space program’s history.

I found this article on Ars Technica that commemorates all three of NASA’s worst disasters: Apollo 1, Challenger, and Columbia, which are clustered together during a five-day period at the end of January and beginning of February. Today, January 28th is NASA’s official Day of Remembrance for these terrible incidents.

While I was not alive for Apollo, and was too young to remember the Challenger tragedy, Columbia is the one that hits home for me. I dread February 1st a little every year when I remember what’s coming, and might not post anything that day… So I’m going to make my post now.

I will always remember going to see the shuttle launch on a truly beautiful, cool morning on January 16, 2003 with Adrian. It was a nice drive from Gainesville to our favorite Titusville viewing spot behind the McDonalds next to the apartment buildings up on the water. We went inside to get milkshakes and took our spot on the little dock. You locals will know exactly where I’m referring to…

We were so excited about the mission and the international crew, which included Israeli astronaut Ilan Ramon. It was a beautiful and successful launch. Seeing a space shuttle launch was always one of the most exhilarating things ever. I am incredibly lucky to have seen several launches, and the magnitude of it fills you with indescribable emotion.

The image below is probably the only image I have of when I saw the launch of the Space Shuttle Columbia. I don’t have a clear one without the text – which I probably added to stick on my LiveJournal or blog back in 2003 after I got the film developed.

Imagine our shock to wake up 2 weeks later on the morning of February 1st to hear that Columbia had broken up upon entering Earth’s atmosphere. Adrian & I were heartbroken and horrified.

Today, honor the memory of the Challenger astronauts, those lost in the Apollo 1 accident, and the astronauts who were aboard Columbia. These astronauts sacrificed their lives in the name of scientific discovery, exploration, and the hope that maybe we aren’t the only ones out here floating in the middle of space on a “pale blue dot.”

“Mankind is led into the darkness beyond our world by the inspiration of discovery and the longing to understand. Our journey into space will go on.” George W. Bush

A screenshot from my computer on February 1st 2003: