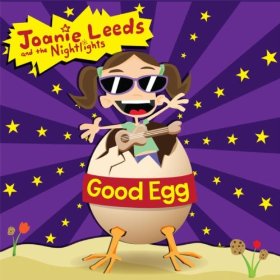 If you’re like me, as soon as you get in the car, the music goes on. It’s a routine that I’ve done every time I’ve gotten in the car since I was a teenager. I’ve always loved listening to alternative rock, singer-songwriter ballads, and of course, I went through a classic rock phase. Now that I have kids, I try to get them to love my old favorites, but it doesn’t always happen. My son Zachary has been known to plug his ears once or twice when I put on a song he doesn’t like!

Fortunately, we have Joanie Leeds!

We were introduced to Joanie’s music a few years ago, but really got to know (and love and adore) her brilliant voice and catchy lyrics with the release of her last album. When we learned that she’d be releasing another album in 2014, Zachary wasn’t the only one counting down the days and asking when the new Joanie songs would be here – I was checking the mailbox every day on the way out of the house so I could pop the CD into my car’s stereo system right away and listen!

I’m not ashamed to say that when Joanie’s newest album, Good Egg, arrived at my doorstep, I popped it in the car stereo and left a little early that day to pick the kids up from school so that I could listen to all of the new songs all the way through, all by myself. 🙂 Yes, I just admitted to all of you blog readers that instead of listening to my usual Rob Thomas or Stevie Nicks, I chose to listen to a kids’ album. It’s just THAT GOOD.

The album starts off with the fast paced Food Fight, which is a pretty funny song! We love this song and can listen to it over and over again! After the first few listens with Zachary, he curiously asked me if the things Joanie was singing about in Food Fight had happened in real life. So, Joanie, if you’re reading this, inquiring minds want to know!

“It’s hard to live in a grownup’s world sometimes. They tell jokes that aren’t anything like mine.”

This is a truly amazing song that gives me a different perspective on the thoughts of a child. I think it should be required listening for every parent with young children!

The next three songs, Good Egg, Drummer Dan, and Hipster in the Making, are all great songs that vary in music types, which shows off Joanie’s incredible talent and ability to make any style her own. Hipster is a hilarious song  that anyone my age will get a good giggle over!

Next up are some of our very favorites — Stories from the Road details some of the crazy things that have happened to Joanie and her crew while on the road performing shows. Dino on the UWS is a tune about finding a dinosaur on the Upper West Side of NYC. The refrain, “oh me oh my” is fun to sing along with and is definitely a favorite of Zachary’s! The World is Your Oyster is one of my absolute favorites on the album – it’s a duet and is written completely in idioms. Confusing Costume is an adorable song about having a unique costume in a sea of Disney Princesses.

The tenth song, My Dad, is a sweet tribute to Joanie’s dad. I think every little girl can relate to this one! “I’m never sad when I’m with my dad. He’s so extra special.”

The next few songs are upbeat and fun, really rounding out the album!

Shadow describes how a child sees their shadow come and go throughout the day. Germs is a rocker of a song and you can’t help singing along! “Germs, germs, tiny and sneaky. Germs, germs, totally freaky.” It’s one of Zachary’s and my favorites and has the best guitar riff! Dr. Lowett is a song about Joanie’s pediatrician and all of the thoughts and worries that kids have when they go for their visit to the doctor. Always on the Run is about Santa Claus, the Easter Bunny, the Tooth Fairy and Leprechauns and all of the things they do!

The last song on the album, I Love You, is a beautiful lullaby that any child will adore. Not only is it a perfect ending for an album that was obviously a labor of love, it is truly a treasure and a gift for all of the parents out there listening to the album with their children. I promise that this lovely song will bring a tear to your eyes and make you think about how much you love your little ones.

Thank you, Joanie, for another wonderful album. We cannot get enough of your music, and we were so thrilled to have the opportunity to review another selection of your beautiful songs!

Disclosure: A complimentary copy of the album was received in exchange for an honest review.