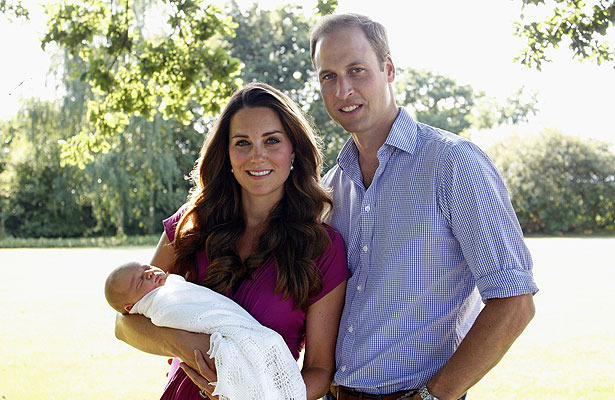 Prince William and Catherine just released a set of cute family snapshots of them with their adorable new baby, Prince George, and their dogs. They decided to break tradition and send personal snapshots captured by Prince George’s proud grandpa, Kate’s father Michael Middleton, instead of hiring a pro.

Professional photographers everywhere (including some named in this CNN article) are going nuts over the whole thing, totally flabbergasted that they didn’t hire a professional to do the job, criticizing them like crazy since the photos are just chock full of technical errors. Obviously, they could afford it, so what gives?

Personally, this is not a surprise to me. William and Kate both seem to take matters of their privacy very seriously. Prince William has been in the public eye since his own birth, and after his experiences with the paparazzi, I can see why he would want to maintain a level of privacy for his family. I think that these photos are great for PR — they are showing their countrymen that they are regular people — a normal, happy young couple who just had a baby and asked grandpa to take some photos to commemorate the event. It makes me feel like they are just like us!

Let me tell you, I don’t doubt AT ALL that they let this moment go by without hiring a professional photographer. I strongly believe that Will and Kate value photography — private photography. They hired lifestyle photographer and Middleton family friend Millie Pilkington to take candid shots and informal portraits during the royal wedding. These shots were never made public and are now part of William and Kate’s private collection.

I think that the royal couple would do the same with their newborn’s first portraits. If I were them, I wouldn’t want the pomp and circumstance of a very public newborn session either, so I imagine they hired someone with a full NDA agreement and purchased all rights to the images.

As for Michael Middleton’s images? The photos are sweet and casual, and while they may not be “perfect,” they are real images from a real family. It is refreshing to see real family snapshots as a first official photo rather than photoshopped celebrity images of a baby that have been sold to the press.

What do you think? Are the photos awful or cute?