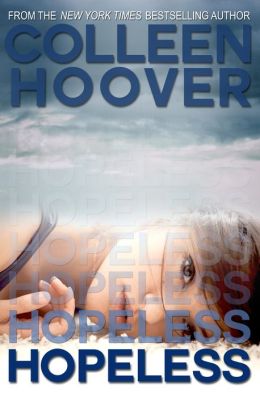 Buy on Amazon or B&N

So as you may know, my favorite kinds of books are sci-fi/fantasy/paranormal. BUT… I’d heard so much about HOPELESS that I decided to read it. It was only $3.99 in the nook store, I might as well give it a try. Well, I was totally blown away. In fact, blown away is an understatement.

This was by far one of the best books I have ever read. In fact, I stayed up until 3am reading it, until my eyes just couldn’t stay open any longer, and then I polished off the remaining 20 pages or so as soon as I woke up (exhausted), and savored them like a delicious dessert while drinking my morning coffee.

The story starts off with Sky, a teenager whose mom refuses to allow any form of technology in the house and who has been homeschooled for her whole life. She decides that she wants to enroll in public school for senior year to improve her college resume and her mom  reluctantly agrees. After her first day of school, she meets a guy at the grocery store who both creeps her out and fascinates her: Dean Holder. She is taken aback by him, because she has never felt anything for any guy before, but instantly feels a connection to Holder. However, he acts super creepy towards her, and she’s not sure if she ever wants to see him again. In a crazy twist of fate, not only do they meet again, but their relationship brings up truths about Sky’s life that she never even knew existed.

The characters in this book are amazing. Sky is one of the most honest, raw, and real characters I’ve ever read about. I honestly don’t know how she makes it out at the end without going crazy. She is so level headed and rational. And Holder – well, he’s just perfect – he’s the guy that everyone wishes could be their boyfriend.

This book went in a direction completely different from what I expected. I thought it was going to be a typical (but good) young adult romance story, but it was SO much more than that. There is so much plot jam-packed into this book, it will leave you thinking (and feeling) about what you just read for days after. If you are looking for a book to savor, you’ll find it in HOPELESS.