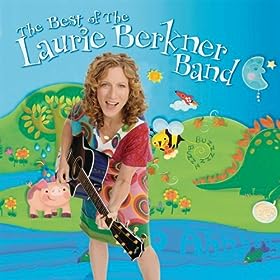 I recently had the opportunity to review Laurie Berkner’s brand-new album, The Best of the Laurie Berkner Band, and it was every bit as wonderful as I expected.

Laurie is SO talented. She is like the Sheryl Crow of kids’ music, and her band seems so adorable and sweet. Her music is catchy, fun, and totally captures my child’s interests, which says something considering he isn’t even two years old yet. When we sing Laurie’s songs together while the CD is playing, Zachary gives me happy smiles and giggles and even claps his hands! Music has always been a constant in my life so it’s important to me to find great music that my son and I can both appreciate together.

Zachary and I first learned about Laurie when we heard her on Nick Jr. I was captivated by the song Five Days Old and had to find out who the singer was. Since then, we’ve really come to enjoy seeing her music videos on the TV channel, plus her guest appearances on Jack’s Big Music Show (one of our favorite shows), so it’s been really fun to hear this compilation, which is her “Best of” collection.

Laurie has a perfect voice for children’s songs – light, airy, and happy! Her original lyrics are fun and cute, and real. She manages to maintain the unique standpoint of a child’s curiosity in her songs. I think that all of the songs are very good in their own way – after all, they did make the “best of” CD – but there are quite a few amazing standouts. Our favorite songs are Rocketship Run, We are the Dinosaurs, Victor Vito, and Five Days Old. I also particularly love I’m Gonna Catch You, I’m Not Perfect, and Fast and Slow. The new song, Open Your Heart, is really pretty, too, and a great addition to the mix.

There’s not much to change about this awesome CD, but aside from the new song, I think more thought could’ve gone into the bonus tracks. I like Moon Moon Moon, but would have loved an alternate version of Five Days Old instead… and maybe another new song instead of Pig On Her Head, which isn’t one of my favorites.

Overall, if you’re a Laurie Berkner fan, you’re going to LOVE having all your favorites in one place. And if you’re just starting out with Laurie, this is the best CD to get for sure!

BUY IT! If you buy the CD on Amazon, you’ll get a whole bunch of bonus videos and a digital booklet which isn’t included in the actual CD version! Pretty cool! You can also buy Laurie’s CDs on her website, LaurieBerkner.com.

WIN IT! Two Tomatoes Records has been sweet enough to provide a copy of The Best of Laurie Berkner Band CD and a bonus CD – Putumayo Kids Presents Rock n Roll Playground – for one very lucky reader! United States only, please.

MANDATORY ENTRY (worth 1 point): Leave a comment telling me either, a) what your favorite Laurie Berkner song is and why? or b) why you feel it’s important to encourage music in your child’s life.

The contest closes on August 31, 2010 at 11:59 Eastern. Winner will be chosen via random number generator and will have 48 hours to respond before a new winner is chosen.

Disclosure: I was provided a sample CD from Two Tomatoes to review, however I did not receive any compensation for this review & all opinions are my own.